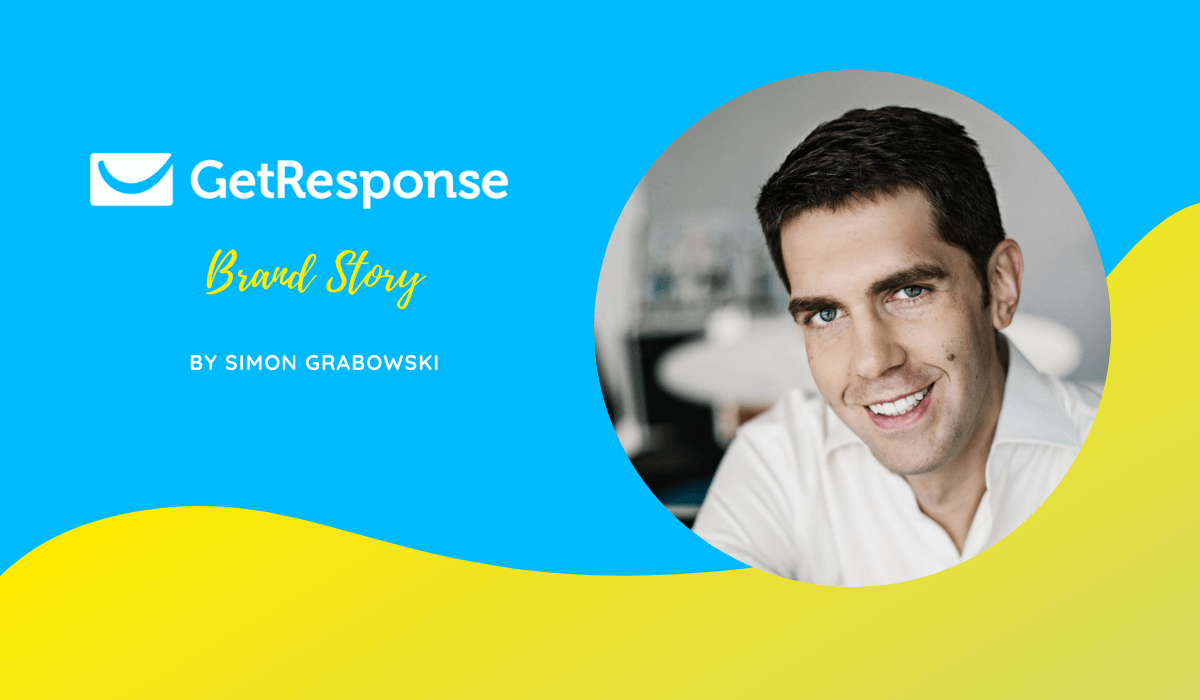 My name is Simon Grabowski, and I’m the Founder of GetResponse. The story of GetResponse started in 1997, 25 years ago. But as my colleagues like to say, “Time flies with GetResponse.” That’s true, and I still recall the company’s first days. I absolutely love what I am doing. And if you ask me about an exit strategy, I don’t have one. I’m not planning to exit any time soon…

The Beginnings of GetResponse

From humble one-person beginnings in a small Polish city to a globally-rooted brand both in terms of customers and workforce.

I was 17 when I started the company. I didn’t plan to create an international company; I was just trying to solve my problem. I owned a travel-related business called Travel Poland. The website was a kind of listing of the accommodations available for travelers in Poland.

I had to send emails to multiple subscribers, which was indeed a time-consuming task. I started looking around for a tool to automate this process, and I didn’t find any. So, I decided to create my own email tool, having $200 as a starting capital. As I had a bit of coding experience, I designed the website myself. That is how Bizmaker was created. It was a real one-man shop 😉

I was not too fond of the name at some point, so I renamed it to Implix (which became GetResponse later) before the product release.

The beta version of the product was launched in 1998. Implix had a SaaS (Software as a Service) business model from the very beginning. I was targeting American customers and wanted to ease their marketing efforts. The HQ was in my dad’s attic 😉

In 2003 Implix grew to 6 people. In 2007 we opened the company’s first overseas branch – in Halifax, Canada. Two years later, we had customers on every continent, excluding Antarctica.

In 2010 the number of employees reached 100 people. The Polish history of the platform started only in 2010 when we launched the version of the platform in Polish. We gained the first 1,000 Polish customers the same year.

We made another significant step in 2012. We created a mobile application for both Android and iOS systems. In the same year, Implix introduced a new logo – a symbol of a smiling envelope. The symbol remains in our logo to this day.

The company was growing quickly. In 2013 we opened two new offices – in Warsaw and Moscow.

2014 – A Meaningful Year for GetResponse

In 2014 we launched an AI anti-spam system named Hydra. Hydra changed the game for Implix completely. The company stole the show indeed. The same year, we changed the company’s name to GetResponse. We were looking for a cool and dynamic name that would focus on customer results – that’s how we came up with the idea of GetResponse.

The same year, Clickmeeting, a webinar platform company, separated from GetResponse to focus on its growth as an independent entity.

In the fall of 2017, the company organized a series of email marketing and marketing automation conferences and workshops called ResponseCon in Poland. We also launched a Certification Program to improve marketers’ skills.

We even held a golf tournament called the GetResponse Cup in Poland. In the same year, the Brazilian branch of the company, based in São Paulo, was opened, and a series of ResponseCon conferences were organized in Malaysia and Russia.

We were adding new advanced functionality to our email marketing platform every year. Eventually, we grew up into a marketing automation platform. Among our customers we have small businesses and big enterprises – we developed a special toolkit for enterprise customers, now called GetResponse MAX.

In June 2020, because of the COVID-19 pandemic, GetResponse officially announced the transition to the remote-first mode. Thus, we became one of the first remote Polish companies.

In 2021, GetResponse had two big launches – a website builder and the freemium suite. I find the idea of freemium fantastic – entrepreneurs-beginners can start their marketing for free. I wish I had such a solution 25 years ago.

Today GetResponse is a fully remote company, and we are not planning to return to the office. The remote-first model allows us to recruit great talents from all over the world. We have 400 employees located in 14 countries, and we keep hiring.

From the product side, we’ve just launched our marketing automation suite for eCommerce. Businesses follow consumer demand online, and new online shops pop up every other minute while the eCommerce market continuously sets sales records. This fact compelled us to create a powerful yet affordable solution that can make marketing for eCommerce businesses easier.

We have a few releases planned for this year. In terms of future plans, there are still a lot of challenges that our customers face because the digital world keeps evolving, and there are constant updates. So, our main aim is to continue helping GetResponse users handle all the changes and keep growing with their businesses.